Harnessing the power of Kafka

Is there more to Kafka than the usual producer and consumer APIs?

Kafka, the event streaming platform, is usually known for its producer and consumer APIs allowing applications to write, store and retrieve events from the platform in a decoupled way. In the age of ubiquity of compute resource and huge volume of data being generated, it offers the possibility to store in very efficient, robust, and highly available way, the huge volume of data, acting as a broker for all involved parties and applications.

This article is part of a series aiming to provide a good understanding of Kafka technologies and their use to solve different challenges.

Streams also known as Kafka Streams API is a stream processing library built for Apache Kafka. It is part of the official Kafka project. It allows real-time processing of data, enabling the design and implementation of stateful and stateless applications either with the use of stream processing operations like filters, joins, maps, aggregations or through the definition of the underlying processing topology. Furthermore, it is described by Kafka as the "easiest way to write mission-critical, real-time applications and microservices".

The increase of the demand for near-real time to real-time processing capabilities of streaming data has driven the development of the Kafka Streams API. Before Kafka Streams, batch processing or batch-oriented approaches were used by stream processing frameworks to build applications to consume data from Kafka topics and process the collected data in chunks (batches) and then store the output for later use.

Why an additional stream processing library?

Before the release of the first versions of Kafka Streams in Kafka 0.10.0 in 2016 and during its early days, there were mainly 2 options for building Kafka based stream processing applications:

Stream processing applications built solely on the Consumer and Producer APIs tend to become very quick complex with a lot of code to write when nontrivial operations like records aggregations, joins and event grouping are necessary. Additional effort is also required to provide robustness and availability, allowing the application to be fault-tolerant and recoverable. Application developers must implement availability and recoverability strategies.

Micro-batching is a variant of traditional batch processing, allowing the collection of data in small frequently occurring group of data (batches) in contrast to a batch processing acting on a larger group of data. In this form, micro batching allows executors to execute a certain logic on data collected after a small given duration of time. This approach suffers drawbacks in use cases requiring lower latency and real-time ability, to respond to business relevant questions.

Other stream processing frameworks like Apache Spark or Apache Flink require the use of additional dedicated platform(s) (processing cluster) for submitting and running the different stream processing programs. This introduces more complexity and overhead.

Kafka Streams was designed with the goal to simplify stream processing, providing a framework/utility with simple application model which fulfills the most important goals for data systems which are scalability, reliability, and maintainability.

Is it all? What else does Kafka Streams provide?

It is important to define some keywords which will be used in the following points. A stream is an abstraction provided by Kafka Streams, representing an unbounded, continuous updating data set (https://kafka.apache.org/10/documentation/streams/core-concepts.html). Kafka Streams being a client library for processing and analyzing data stored in Kafka, a stream processing application is a program that makes use of the Kafka Streams API.

Kafka Streams follows a programming paradigm called dataflow programming, which models a program as a directed graph, a series of steps made of inputs, outputs, and processing stages with the data flowing between the various operations.

The processing logic in a Kafka Streams application structured as a directed acyclic graph (DAG) represents how data flows through a set of various steps. These steps also called processors form a topology.

There are 3 types of processors in Kafka Streams:

A stream processor topology is thus a collection of processors concretely defined as an acyclic graph of sources, processors, and sinks processors. The picture 1 gives an example of a topology and the different processors building this topology. 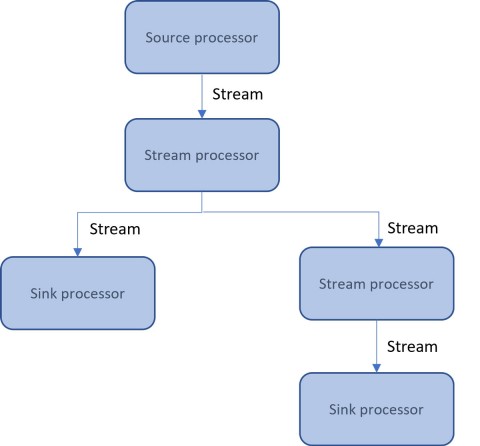 A simple topology can be considered as a triple input (consume), process and write. Kafka Streams divides a topology in smaller topologies, sub-topologies, to parallelize the processing work. This is useful when, for example, an application consumes and combines records from various topics for processing. In the picture 1, the right-hand branch having a stream processor and a sink processor after the main stream processor represents a sub-topology.

Kafka Streams use a depth-first processing strategy while processing the topology. Each record consumed from Kafka goes through the whole topology (each processor in the topology) before another record is processed. This means that only one record goes through the topology at once. In case of a simple topology, each record consumed will be processed and possibly written to another topic or external sink before consuming the next record. In case of multiple sub-topologies, the depth-first strategy is applied to independent sub-topologies, which will be processed independently of each other. The single-event rule does not apply to the entire topology, but to each sub-topology.

Kafka Streams use 2 different ways to model data in topologies: a stream (also called a record stream) or a table (also known as a changelog stream).

A stream represents an unbounded, continuous updating data set. A stream records the history of what has happened in the world as a sequence of immutable records. A stream is "an ordered, replayable, and fault-tolerant sequence of immutable data records" according to the official Kafka Streams specification, where a record (also known as log) on the other hand is simplified a key-value Pair.

A table contrary to the stream represents the state of the world at a given point in time, usually now. A table can be considered as a continually updating view of a stream. In few words, streams record history and tables represent state (https://www.confluent.io/blog/kafka-streams-tables-part-1-event-streaming/); A stream provides immutable data and support only insertion of new immutable records. A table on the other hand provides mutable data, since new event records can be inserted and existing rows updated and if necessary deleted, only the latest representation of each key being kept.

The picture depicts the difference between stream and table representations and the possibility of conversion between both. At a time t4 when Offset 3 is received, {action: logout} is the state keeping the latest value for the key Thomas, thus representing the last action done by User Thomas. This value will be stored in the table as the current state for records with key Thomas, overwriting the formal value {action: login}, where {action: logout} is only added to the stream. This interchangeably conversion between tables and streams is called stream-table duality.

As we can see in this example, it is important when choosing between tables and streams, to consider whether only the latest state/representation of a given key is necessary, or the entire history of records.

A stream can be turned into a table using aggregations operations like count, sum and a table to stream by capturing all changes made to the table (insert, update, delete).

If records written to Kafka are immutable, how is it possible to model data as updates, using a table representation of a Kafka topic? The answer to this question in the next article.

The Kafka Streams library combines the various data models (Streams and tables) with multiple operators to support the implementation of both stateless and stateful stream processing applications.

In a stateless processing, no memory of previous records is necessary. In this form of stream processing, a record is consumed, processed, and forgotten. No memory of previous computational logic is required and necessary in the processing. In a stateful processing, on the other hand, information about previous consumed and processed records of the topology is necessary. This is usually the case in aggregations, joins or windowing use cases where the result of intermediate computation in a processor is necessary to process further nodes/processors in the topology.

The notion of time and how it is modeled is a critical aspect in stream processing frameworks. Kafka Streams uses 3 different notions of time: event time, processing time and ingestion time. These different conceptions will impact the execution and result of operations such as windowing, which are based on time boundaries.

The wall-clock time here is the physical time at a given environment, producer, or broker.

Event-time is the time when a data record symbolizing an event was originally created (at the source). It is a timestamp set by a producer (application sending data to Kafka) and is usually the current wall-clock time of the producer’s environment when the event is created.

Ingestion time is according to the official specification the "point in time when an event or data record is stored in a topic partition by a Kafka broker". The ingestion time always occurs after the event time. It is a timestamp set by the broker; thus represents the timestamp of the current wall-clock time of the broker’s environment.

Processing time is "the point in time when the event or data record happens to be processed by the stream processing application". It is the time when the record is being consumed. This occurs after the event time and ingestion time.

Kafka provides two configuration options to set when records are ingested: createTime and LogAppendTime, one at the broker level and the other one at the topic level. The topic-level config takes precedence over the broker-level config. A configuration of LogAppendTime at the topic level will override the value of the timestamp set by the producer when the record is appended to a topic. The CreateTime option will rather enforce the event-time semantic, by making sure to keep the original producer's timestamp in the record.

Kafka Streams leverages windowing, a method for grouping records with the same key for the purpose of aggregation and joining. Windowing operations are available in the Kafka Streams DSL. The different records subgroups also called windows are tracked per record key. Windows are used to group records with some close temporal proximity, depending on the time semantic used to define the temporal proximity. In case of event-time semantics, the temporal proximity can be interpreted as "records that occurred around the same time," whereas with processing-time semantics, it can be interpreted as "records that were processed around the same time.". There are four different types of windows in Kafka Streams.

A grace period can be defined for windows to specify the maximum period to wait to declare data records out-of-order for a window. Records occurring after the grace period of a window will be discarded and not processed in the window.

The Stream DSL is considered a high-level API compared to the low-level Processor API. The high-level Stream DSL is built on the Processor API internally and uses a declarative, functional programming style to build stream processing applications. It provides some high-level abstractions for streams and tables in the form of KStream, KTable, and GlobalKTable, allowing stateless and stateful transformations and windowing.

The Processor API on the other hand uses an imperative programming style and is suited for lower-level access to data, more granular access to the application state. It also offers more fine-grained control over the timing of certain operations. In so doing, it allows developers to define and use custom processors and to interact with state stores.

For more information about Kafka, Kafka Streams and/or ksqlDB visit seminar.ordix.de and book the Kafka seminar. 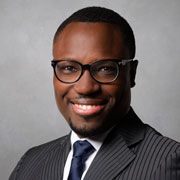